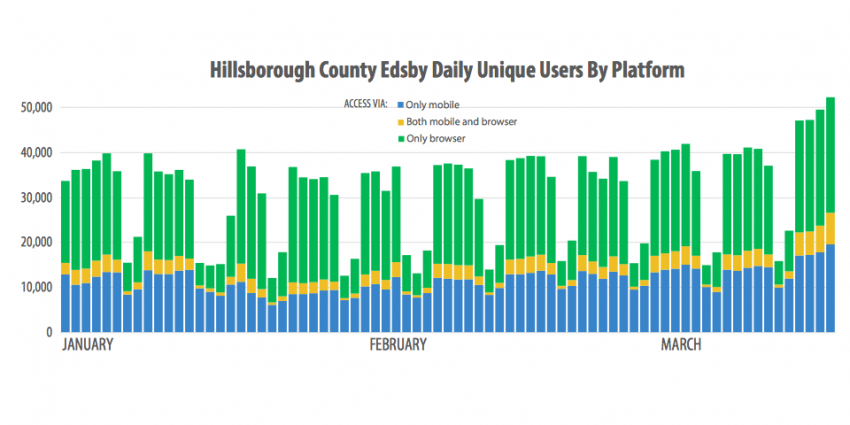 Not long ago, Hillsborough County Public Schools had a communications problem it needed to solve.

The eighth-largest school district in the U.S.—centered around Tampa, Florida—had been using electronic gradebooks to try to share grades with students and parents. Its high schools and its elementary schools originally each used different applications, which never performed well, according to staff, so they were not widely used. Elementary schools in the county only used the gradebook for report cards. At middle and high schools, usage depended on the teacher.

Hillsborough’s previous system wasn’t really a great enterprise system. Transferring students between schools created problems. It was outdated, and not truly web-based. Data was stored in the cloud, but users had to install browser plug-ins in order to access the gradebook. There were problems with Mac OS vs. Windows, and poor mobile support.

Hillsborough district staff decided a change needed to be made. Officials wanted something easy to use, and easy for sharing information with students and parents.

Edsby was installed and adopted surprisingly quickly at Hillsborough, given that the platform connects hundreds of thousands of students and manages more than 50,000 classes in the district every academic quarter.

The county had the system populated with hundreds of thousands of teachers, students and classes and ready to go in sixty days. The secret: Edsby’s two-way integration with the district’s custom student information system (SIS), the key legacy application used to manage student and class data in the district. Even though Hillsborough’s SIS was custom-built for the county, a flexible Edsby structure for integrating with customer systems allowed the SIS integration to be performed in just days.

(Continued in PDF, below. Click to read in full.) 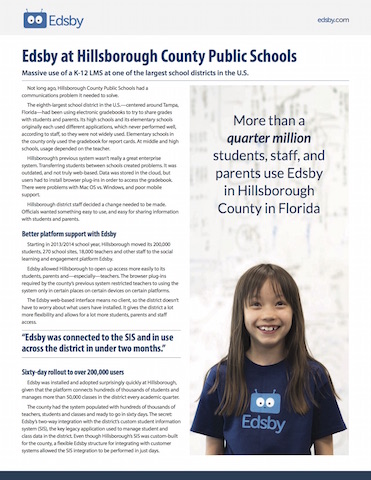