Organizations may be concerned that students can be issued a late slip from the Attendance Office and then not go to class. When a student reports to the Attendance Office to pick up an Admit Slip, there is no guarantee the student will proceed to class. Students have been known to take advantage of this loophole. The Admit Slips System in Edsby closes this loophole and provides teachers the ability to confirm late arrivals without interrupting teaching to manage Admit Slips.

Jump to a Section

There are three options an organization can choose from to handle late arrivals:

Teachers will receive a notification for each late student and they confirm whether the student was late or absent. Otherwise, the students are recorded as absent. 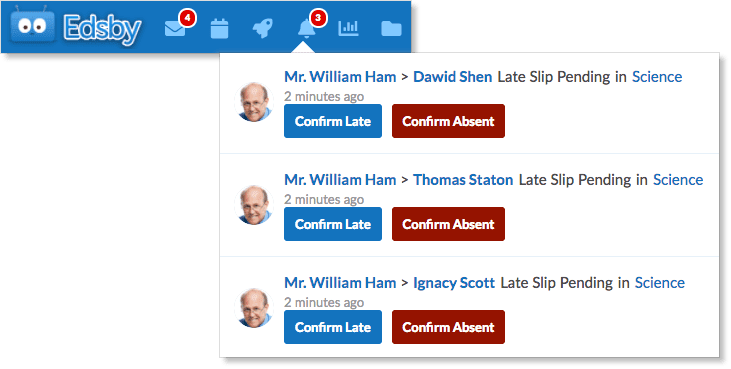 Third, organizations can choose to resolve late arrivals and have the student recorded as late on the Attendance form. The teacher is informed of the late arrivals but no action is required within Edsby. To support this choice, a School District or a private school can contact [email protected] and request that the “Admit slips apply automatically” option be enabled for your organization.

Once enabled, either the Admit Slip on the Student tab or the Bulk Admit Slips on the Incidents tab can be used to record a late. The teacher sees a list of late students under their Notifications bell icon. No further action is required within Edsby for teachers.

Admit Slip is used to issue a slip for one late student at a time. This is done on the Student Tab of the Attendance Zoom.

Bulk Admit Slips is used to issue admit slips for a group of late students at a time, for example, if an entire school bus arrives late. In both cases, you can set the arrival time and reason for the late arrival.

If there is only one student arriving late at a time, search for the student’s name in the Student Tab. Click Admit Slip.

The student’s name will be filled in the form. Select the time they arrived and a reason. Click Issue to Issue the Admit Slip. Or click Issue and Print if you additionally want a hard copy of the Admit Slip. 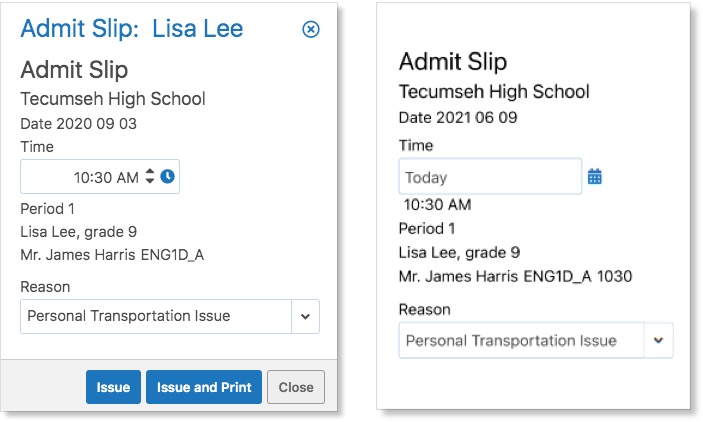 To issue Admit Slips for multiple students, for example, if an entire bus arrived late, navigate to the Incidents page of the Attendance Zoom. Then click Bulk Admit Slips.

Enter the names of the students. Enter the time they arrived and choose a reason. Select Issue or Issue and Print. 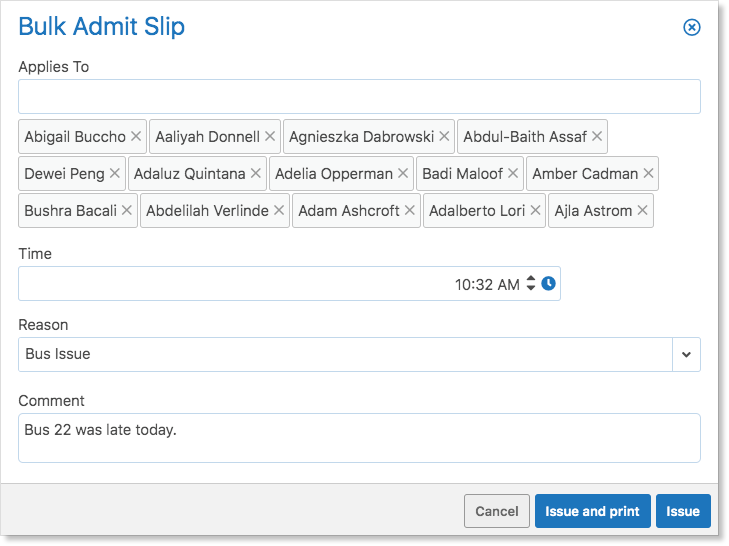 When the teacher confirms that the student has arrived in class, the reason code changes to Late.

If the teacher confirms the student has not arrived in class and is absent, the reason code changes to Absent. This absence is resolved in the same manner as other teacher-reported absences.

What Teachers See on the Attendance Sheets

When a teacher opens the attendance sheet, the Planned Absences are visible.
The information is provided for the convenience of the teacher.

In this example, the period begins at 1:05 PM and ends at 4:05 PM. When the teacher opens the form, Lisa is already marked absent. Maudad is currently sitting in their chair and the teacher has marked her present, but at 2:30 PM, she is going to leave class for a medical appointment. Tho is involved in a school activity that ends at 2:05 PM.

Teachers manage Late Slips through Notifications, located in the Navigation Bar at the top of any Edsby screen. The unread counter indicates when there are pending Late Slips. Clicking Notifications opens a list of Late Slips issued by the Attendance Office.

Students can’t arrive late to a class that has ended – this is an absence, not a late.

The student’s arrival time needs to be set to a time that falls within the period the student arrived late.

If the Attendance Office creates the late slips in the afternoon, the time should be adjusted to fall within the morning session.

High Schools often have multiple periods in a day. In this case, the time of the late slip needs to be set to a time that falls within the period the student arrived late.