Planned absences are potential absences. Next week’s medical appointment could be cancelled. A student may miss the bus and not go on the field trip. A Planned Absence enables the teacher to see that the Attendance Office knows about the absence. When the teacher submits the attendance sheet, the absence is recorded. If the student is in class because their medical appointment was cancelled, the teacher will mark the student present and the Planned Absence for the period is negated.

Jump to a Section

Modifying or Canceling a Planned Absence

In the Student Tab

The Student tab in the Attendance Zoom is the quickest way to create planned absences for individual students.

Search for the student’s name and click Planned Absence.

The Planned Absence form will open with the Who section pre-filled with the student’s name. Enter the time range and reason, then click Save. 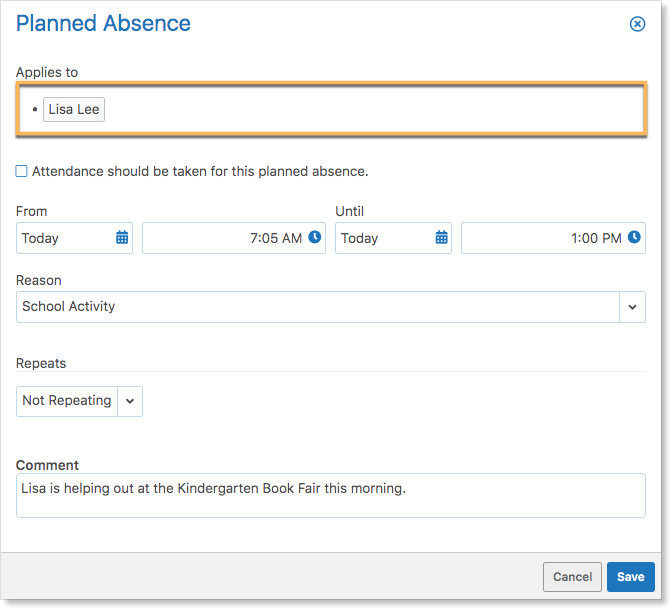 To create a Planned Absence for another student, click Search for New Student.

In the Students Zoom

Access the Students Zoom on the right side of the Edsby Home Screen. 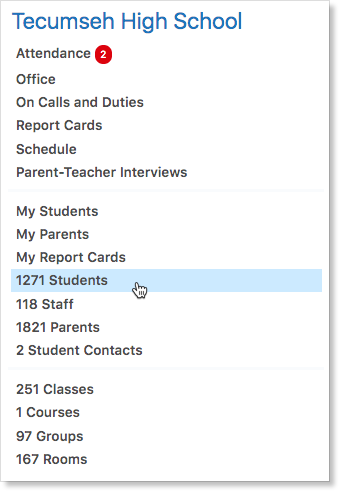 Click Create New if there are no existing Planned Absences. Fill out the time, date, and reason, then click Save to confirm the planned absence.

Creating a Planned Absence for a Group or Class

In the Who field, enter the short name of a class or the name of a group. Multiple classes and groups can be entered.

If there are students who are in the group or class, but are not going to be absent, add the name to the Add Exception field. In this example, the Junior and Senior Girls Baseball Teams will be away at an all-day tournament. However, Lisa Lee has a math test to write and is not attending the tournament. She will be added as an exception. 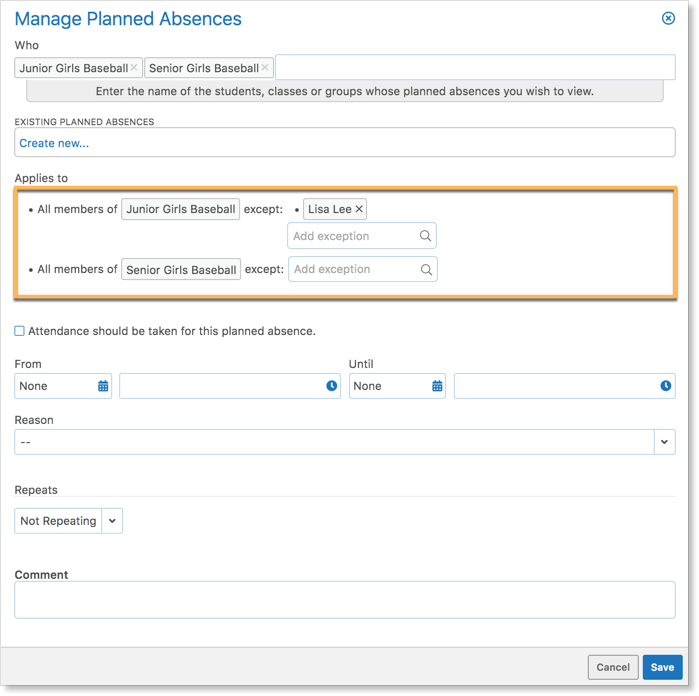 Modifying or Canceling a Planned Absence

To modify or cancel a planned absence from the Planned Absences tab in the Attendance Zoom, use the arrows to move forward or backward through the months and click on a date to jump to it. 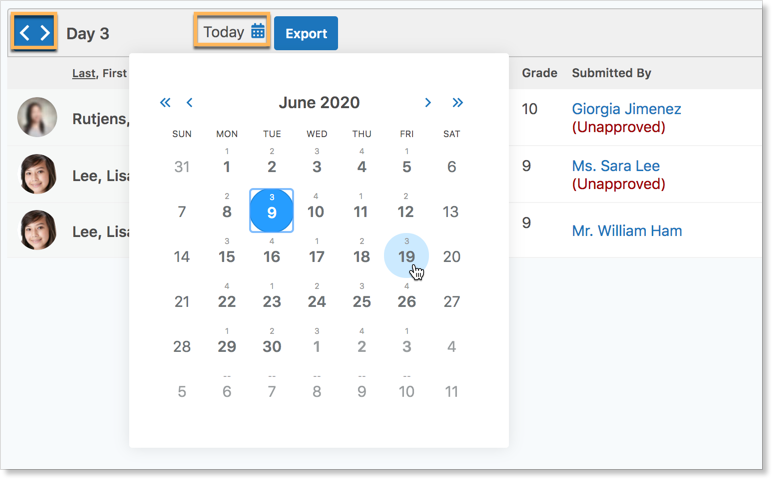 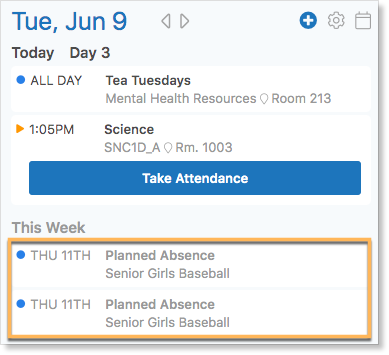 Click Delete to remove the planned absence. To change it, enter the corrected information and click Save.

Note: Taking attendance for a Planned Absence does not replace the Class Attendance Sheet. This sheet should still be filled out by the teacher. Both sheets can be found in the teacher’s Calendar. 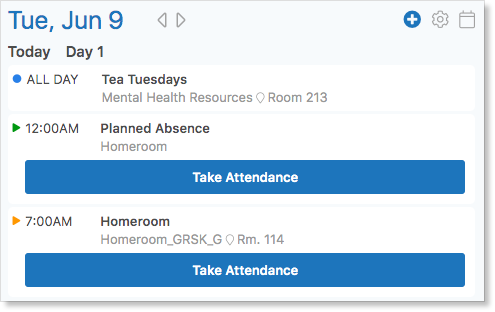 Mrs. Lapp is taking her Kindergarten class to the Natural History Museum. Two of her students cannot join the field trip and will spend the day in Mr. Chowdhury’s class. 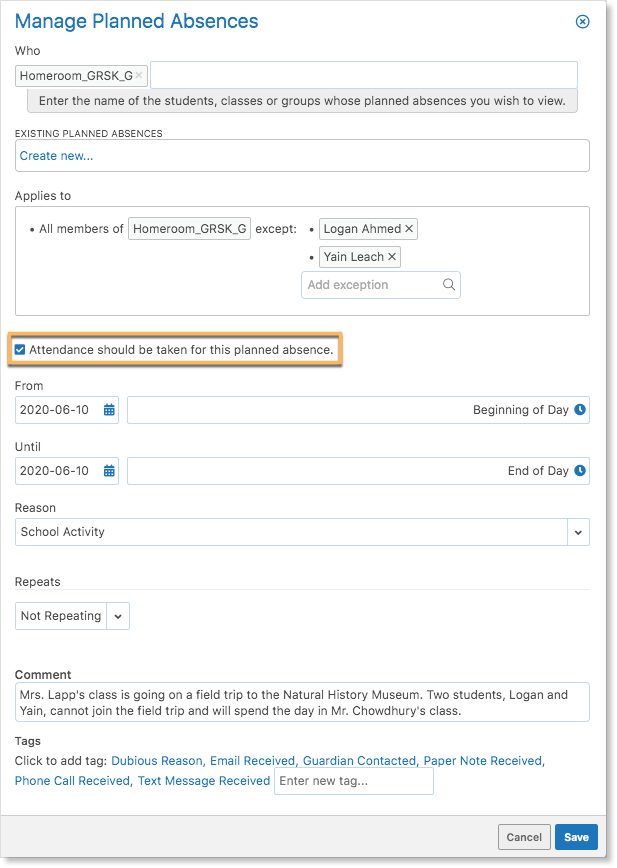 The “Attendance should be taken for this planned absence” checkbox has been ticked so Mrs. Lapp will get an attendance sheet that includes the names of the children who are going on the field trip.

On the morning of the field trip, Mrs. Lapp clicks the Planned Absence event to open the Attendance Sheet.

As the students board the bus, she marks them as present. One of her students, Asela, woke up sick and is not on the bus, so she marks Asela as absent. 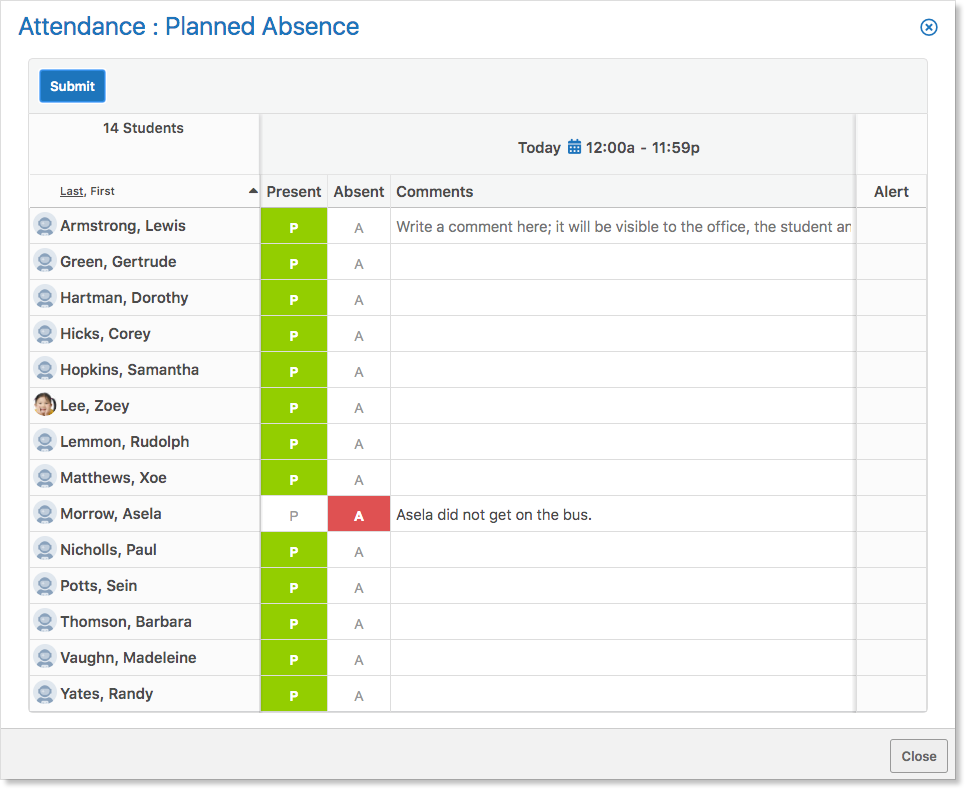 When Mrs. Lapp submits the Planned Absence sheet, the Attendance Office will see an attendance incident for the student that did not get on the bus for the field trip.

The class attendance still needs to be taken. The sheet will list the students that are on field trip as on a School Activity, the student that is ill today is listed as absent, and the two students that weren’t going on the trip are unknown. 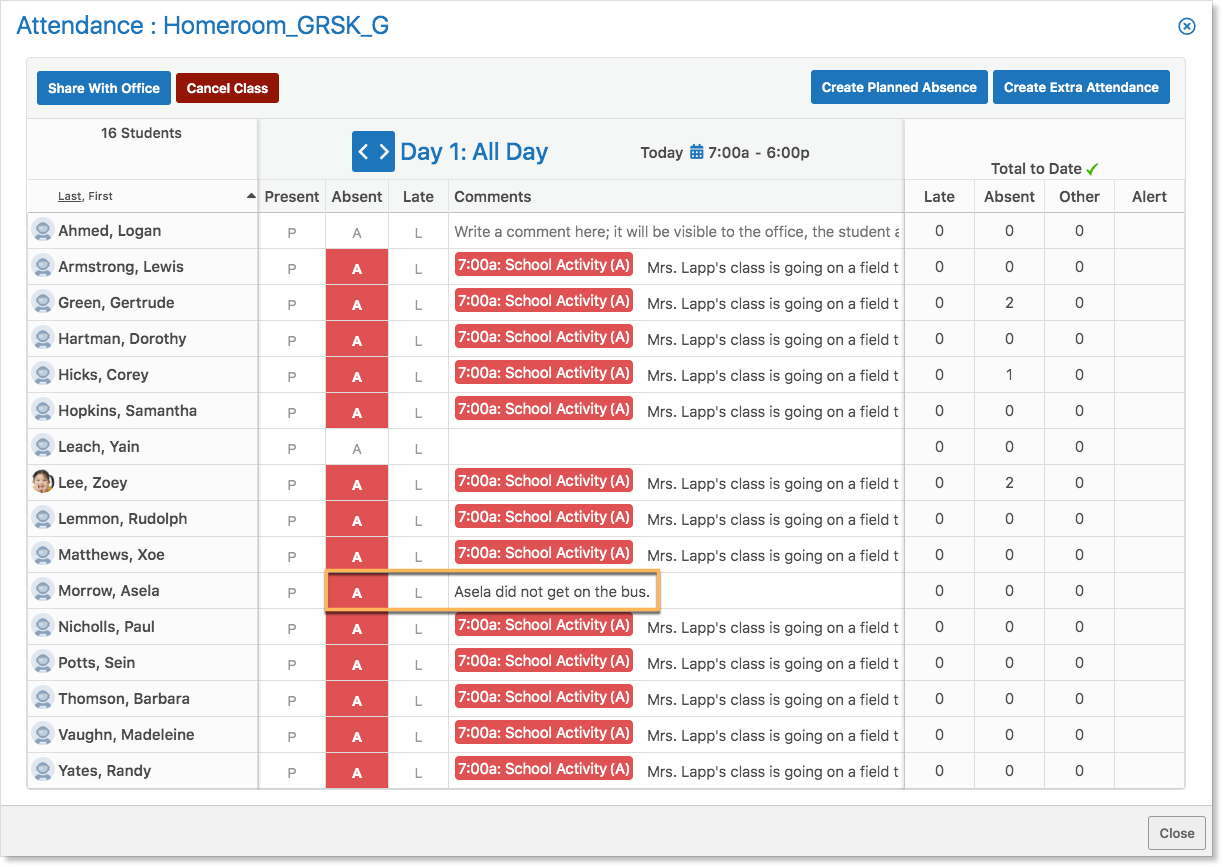 The Office checks with Mr. Chowdhury to confirm they are both in class and marks them as Present and submits the form. 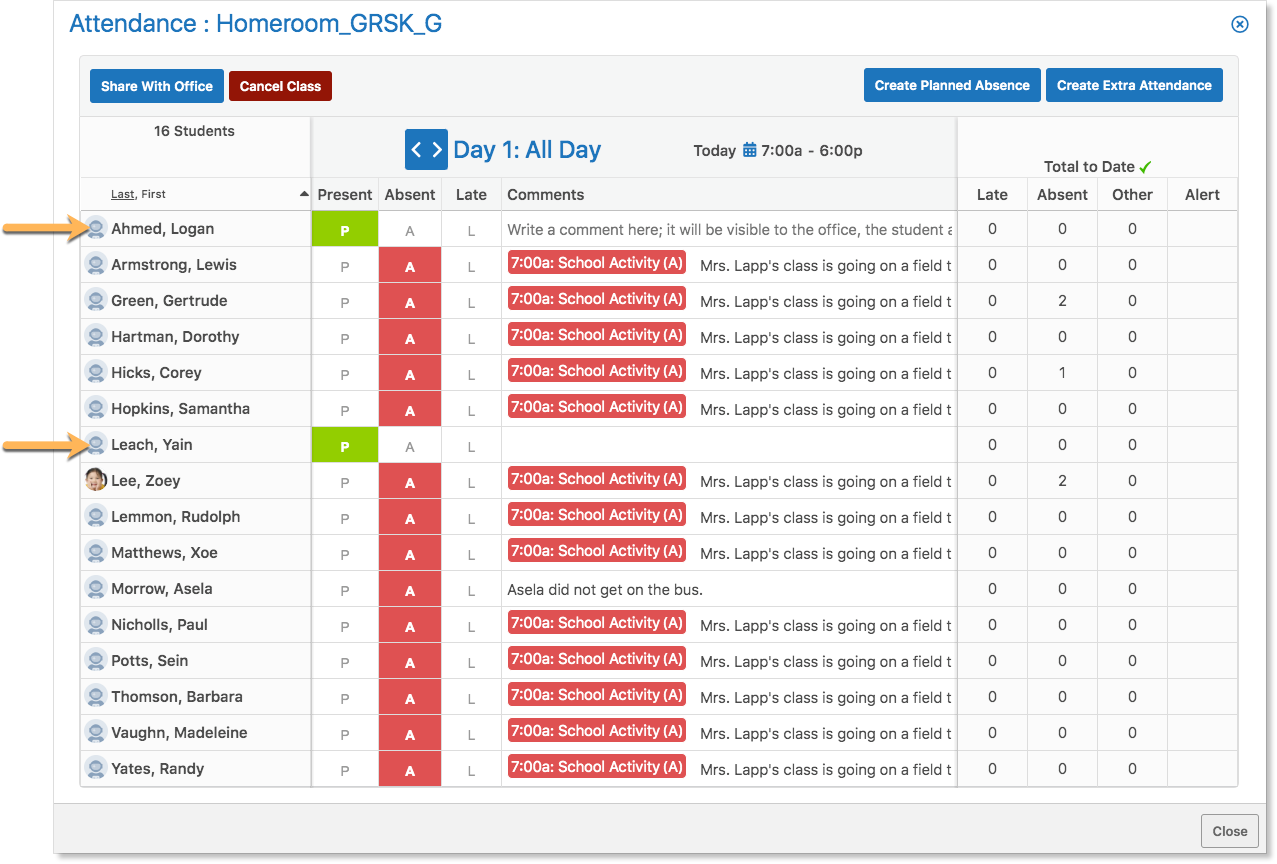 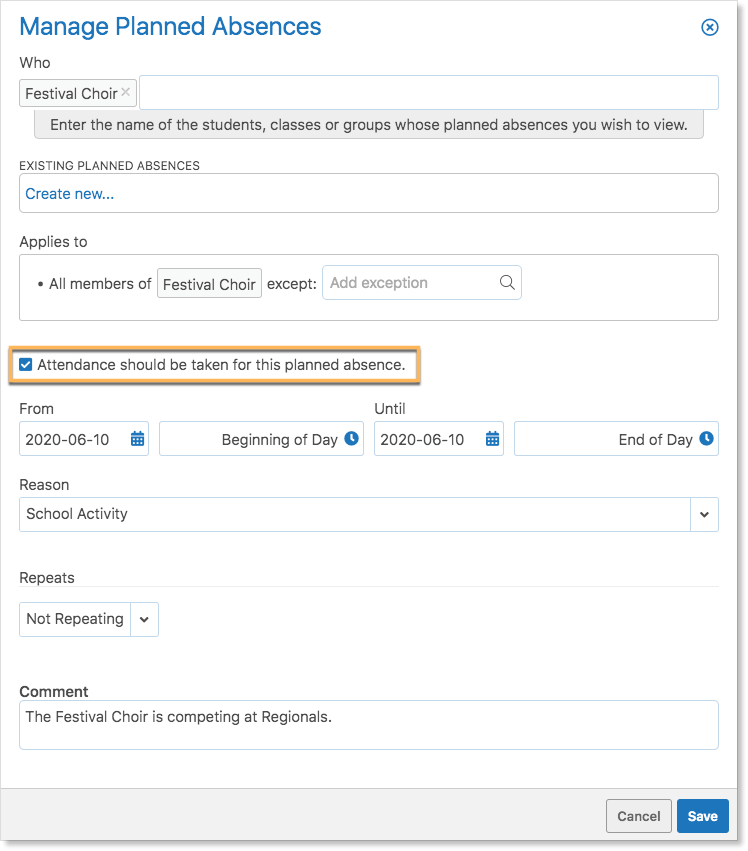 The “Attendance should be taken for this planned absence” has been checked.

Mr. Harris checks the names as the students board the bus. One student misses the bus. 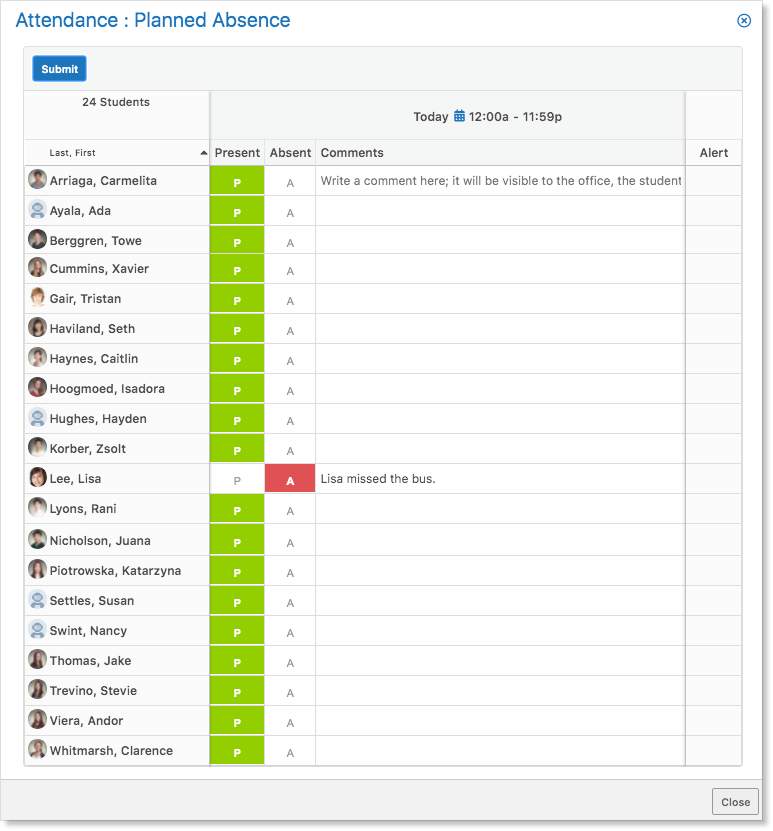 As each student’s teachers take attendance, they will see the students are on a field trip or the student is absent. If the student is missing from class, the teacher submits the sheet without making any changes. 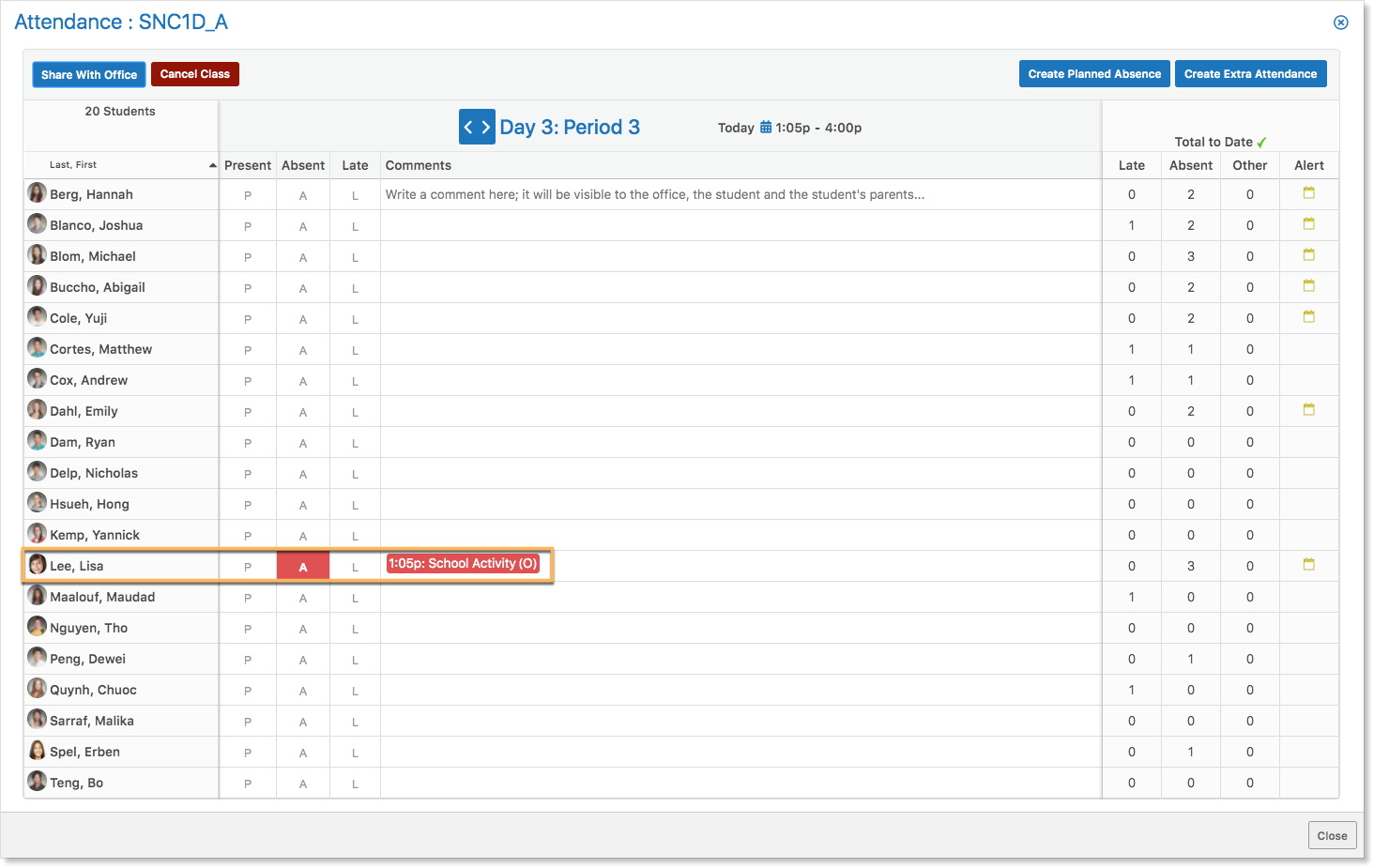 In this example, even though one of the students missed the bus, they went to their classes. In this case, the teacher would mark the student as present and negate the planned absence. 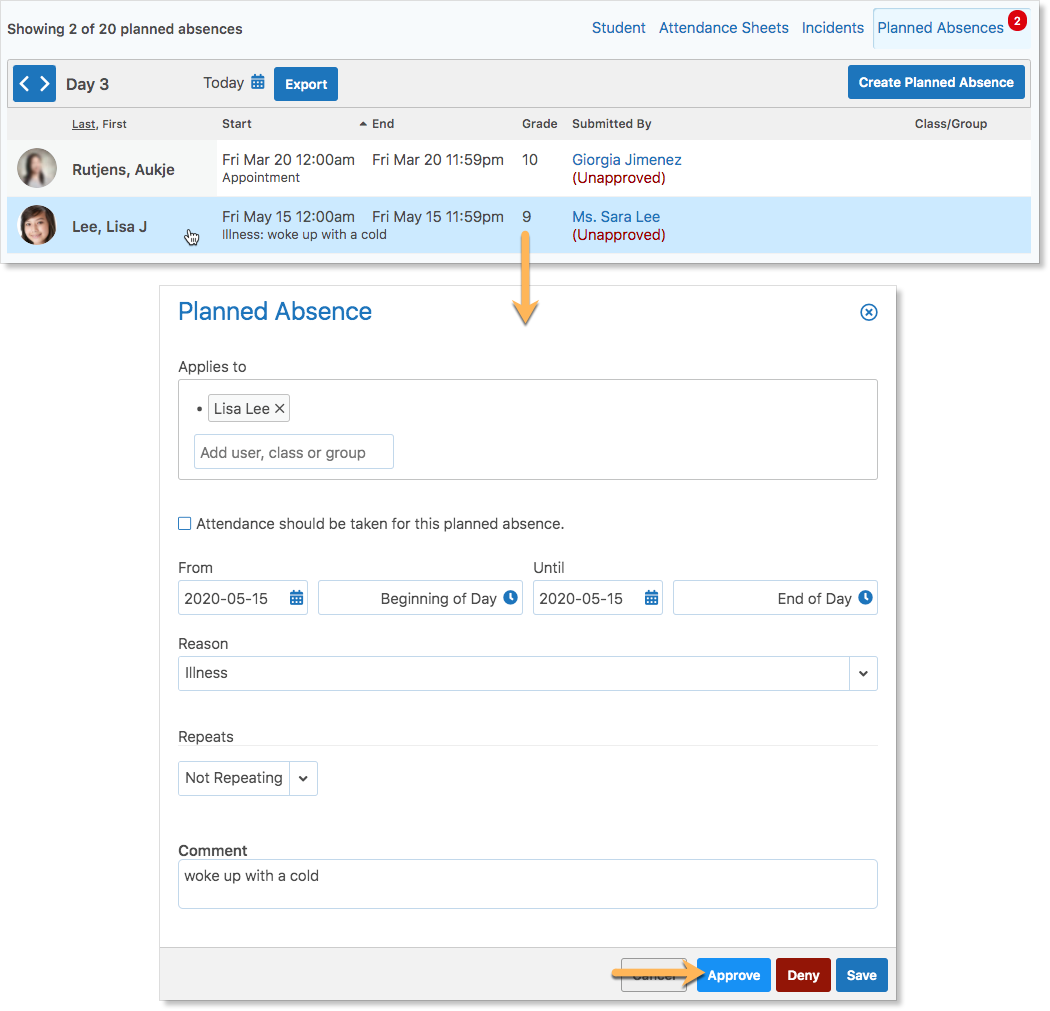 The absence will now appear on the attendance sheet.

After processing the parent emails, voice mails, phone calls, notes, approving parent submitted requested absences and admitting late students, the Incidents tab will list the students who are away for unknown reasons. 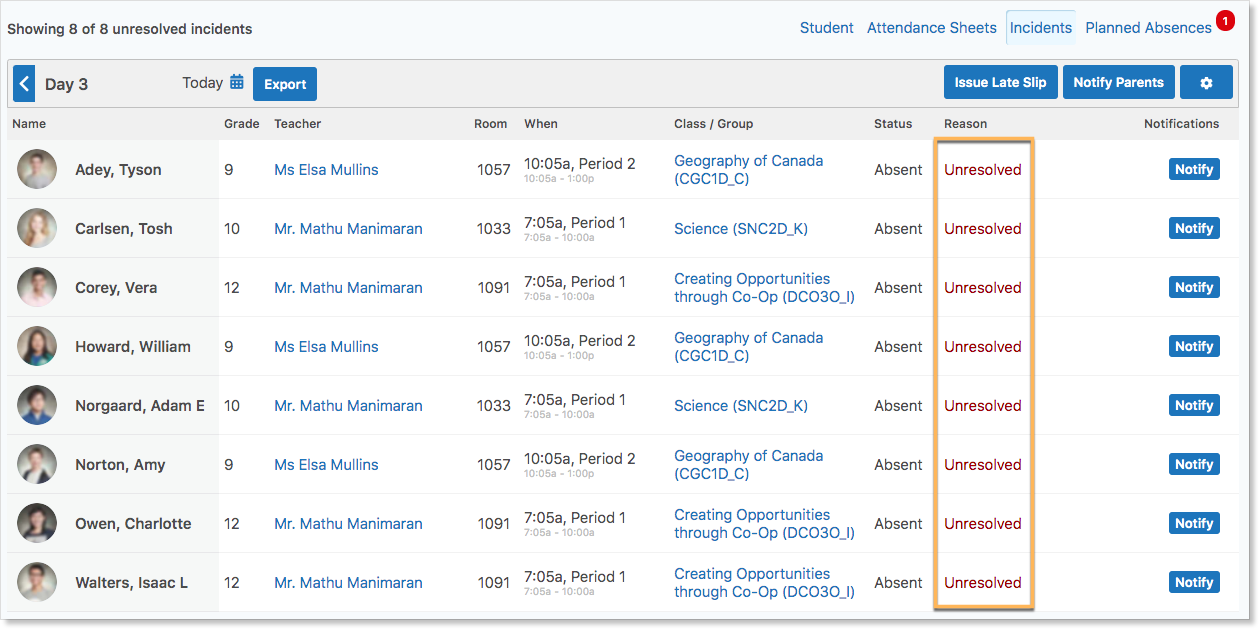 The actions a school takes with students listed in the Incidents tab will vary.